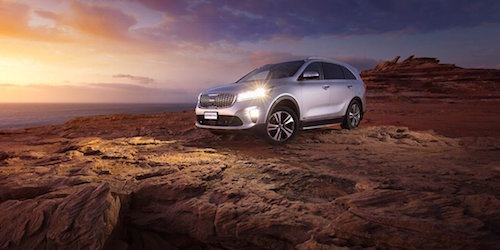 The new 2019 Kia Sorento has refreshed capability, interior styling and newly-added technology. New Sorento models have also earned the title ““Highest Ranked Midsize SUV in Initial Quality” by J.D. Power in their Initial Quality Study. This is the second consecutive year the Sorento has received this honor.

New driving dynamics have been added to this midsize SUV. For the first time new Kia Sorento models are offered with an available all-wheel drive system that automatically routes power to the wheel that needs the most traction. Added stability is provided to the drive train with the Torque Vector Cornering Control (TVCC) system which automatically engages when yaw and steering sensors detect unwanted understeer. These new systems make the new Sorento ready for any on or off-road adventure.

Last year Kia tested the newly designed Sorento’s capability in Moab, Utah with a rugged ascent of Hell’s Revenge trail. It is one of the most obstacle-laden off-road trails in the world and the Sorento mastered it perfectly. Kia is proudly presenting a series of broadcast spots to demonstrate the Sorento’s increased capability and show its journey across the desert. While most Sorento owners will not be traveling in such harsh conditions, it is comforting to know that their vehicle can handle just about anything.

While the new Kia Sorento is tougher than ever before it has been stylishly upgraded with new interior features. Soft touch surfaces and available Nappa leather seats create an exceptional level of comfort and style. The 2019 Sorento offers ample seating for seven and is packed with luxury features such as an available heated steering wheel, and a 14-way power-adjustable driver’s seat. Its versatility is unsurpassed with a variety of seating and cargo configurations courtesy of folding split second and third row seating.

We invite you to explore the new 2019 Kia Sorento at our Kia Dealership in San Angelo, TX. We currently have a wide selection of new Sorento L, LX, EX and SX models in stock now.